Our daughter turned seven yesterday.  She loves all things Japanese so we decided to have a party honoring her passion.  The cherry blossom was also a big inspiration.  We hosted the children from her class and their parents.  Naturally, we went to town.  My family worked hard to make the event memorable and fantastic. 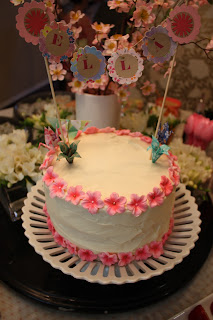 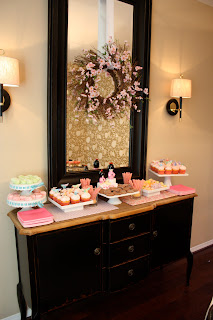 The dessert spread.  Many of these goodies are traditional Japanese confections. Purchased from a dessert shop in Little Tokyo.  I added cupcakes because it wouldn't have seemed like a birthday party without them. 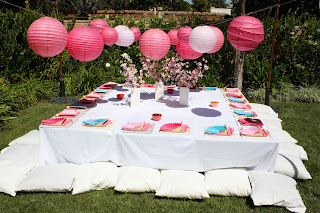 The children's table. I used 3, 15" high kid's tables and surrounded it with pillows, rather than chairs. I created the lantern canopy using 6' bamboo poles inserted into umbrella bases and then made an
"X" out of twine and suspended the lanterns from that.   I borrowed the pillows and table cloths from work (sometimes being a set decorator has its perks).

Party Fans!  The cherry blossom chopsticks from Oriental Trading Co..  The place mats were a last minute choice.  They were constructed of recycled cardboard and fabric that I purchased at one of those crazy cheap places downtown for $1 per yard.  I made each 12 x 12 mat for less than 20 cents each.  And I had a ton of fabric leftover.  My Mom used some of it to sew tablecloths for the buffet and adult dining tables. 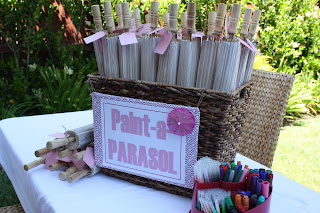 What is a party without a few crafts?  We also had an origami making station and a cherry blossom tree table where the kids made rice paper "scrolls" using india ink and flowers punched out of origami paper. 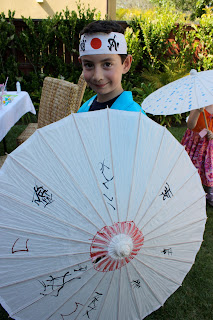 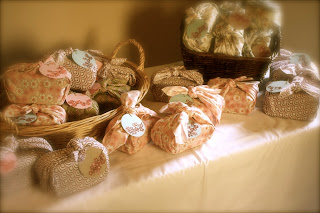 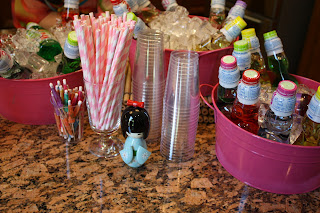 Japanese soda bar. The adults were offered chilled sake and Japanese beers.  I also made a huge batch of cucumber water. 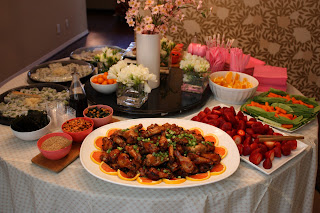 The food.  Mahogany Chicken Wings made by my amazingly talented Mom, fruit, sushi, rice snacks and seaweed.  My Mom also whipped up this tablecloth, just hours before the party began. 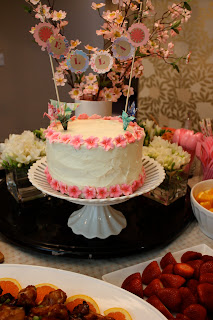 It was a hot day and I was just happy that the cake layers didn't slide! 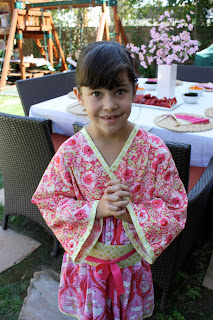 This dress was bought from a seamstress on Etsy. She made the dress for Ella, according to her measurements. It is a sensational dress! 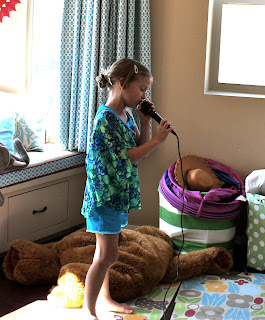 We also had a karaoke "lounge" set up for the kids to sing their little hearts out. 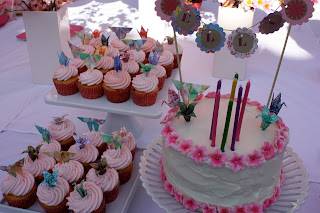 Etsy is my new best friend.  I bought ready made origami cranes, butterflies and flowers and used them as cupcake toppers.  Truth be told... I also bought the sugar paste blossoms.  But I did actually make the birthday "banner" out of extra origami paper. 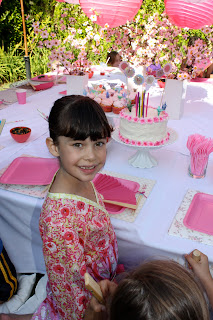 Happy kid.  The party was a success!
Posted by Heidi Miller at 10:08 PM

Buttercream Buzz came to me one night as I frosted 90+ cupcakes and had licked my fingers once or twice. The combination of sugar and butter has the power of making a grown woman feel like a child again. At the party the following day, I overheard some people asking "Who made these cupcakes? Which bakery did they get them from? There is no way she made them herself!" And then a few people came up to me and asked me if I would ever be interested in "doing parties". It is no secret that I LOVE going all out for my children's birthday parties, the fact is that I have no desire to spend my weekends slaving away for other people's kids. So I decided to create this blog as a showcase for those who love this sort of thing, but who may not want to create a career out of it. I know so many talented people who deserve bragging rights. And because baking and hosting parties are such transient activites I wanted to create a lasting way for everyone to enjoy the fruits of their labors. Hopefully this forum will inspire others who may not have as many creative juices flowing!